Version 7.1 brings again more innovations. We were focused to simplification of the program from user point of view and more advanced methods in modeling and check connection parts – welds and bolts.

The most visible new feature in IDEA StatiCa 7.1 is graphical representation of checks.

Checks of all items are sorted into following groups and visualized by corresponding traffic lights colors:

Design section of the program offers now only this option. All other methods of check visualization are available in the section Check.


Now you can only click on a connection component in 3D window, corresponding manufacturing operation is automatically selected and you can modify its properties immediately. 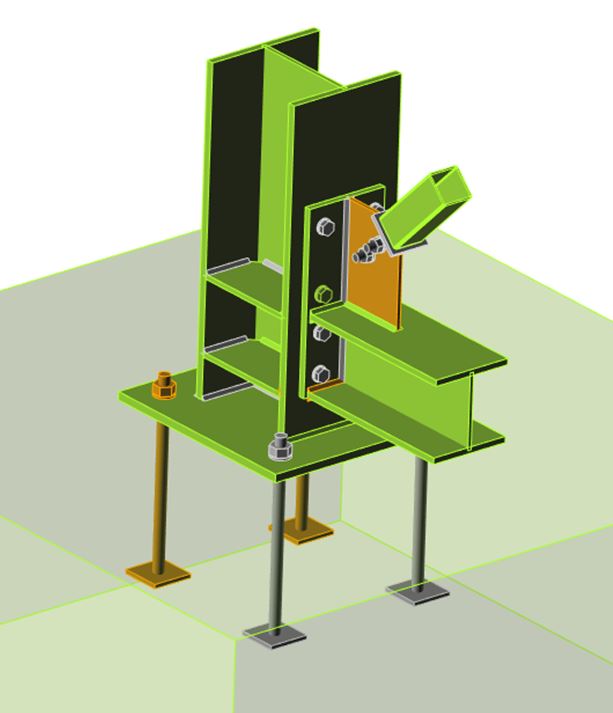 Connection is loaded by tensional force only. See bearing of plates in the case of standard bolts.

If you check the same connection with preloaded bolts you can see smaller deformation and uniform distribution of shear force. The capacity of the connection is smaller in this case.

IDEA StatiCa Connection checks Service Limit State of preloaded bolts. If there is a slipping effect, bolts do not satisfy the check. Then the Ultimate limit State can be checked as a standard bearing check of bolts.

Interaction of shear and tension forces in bolt

IDEA StatiCa Connection can check bolts for interaction of shear and tension.
In the case of setting “Bearing” both checks are performed separately. 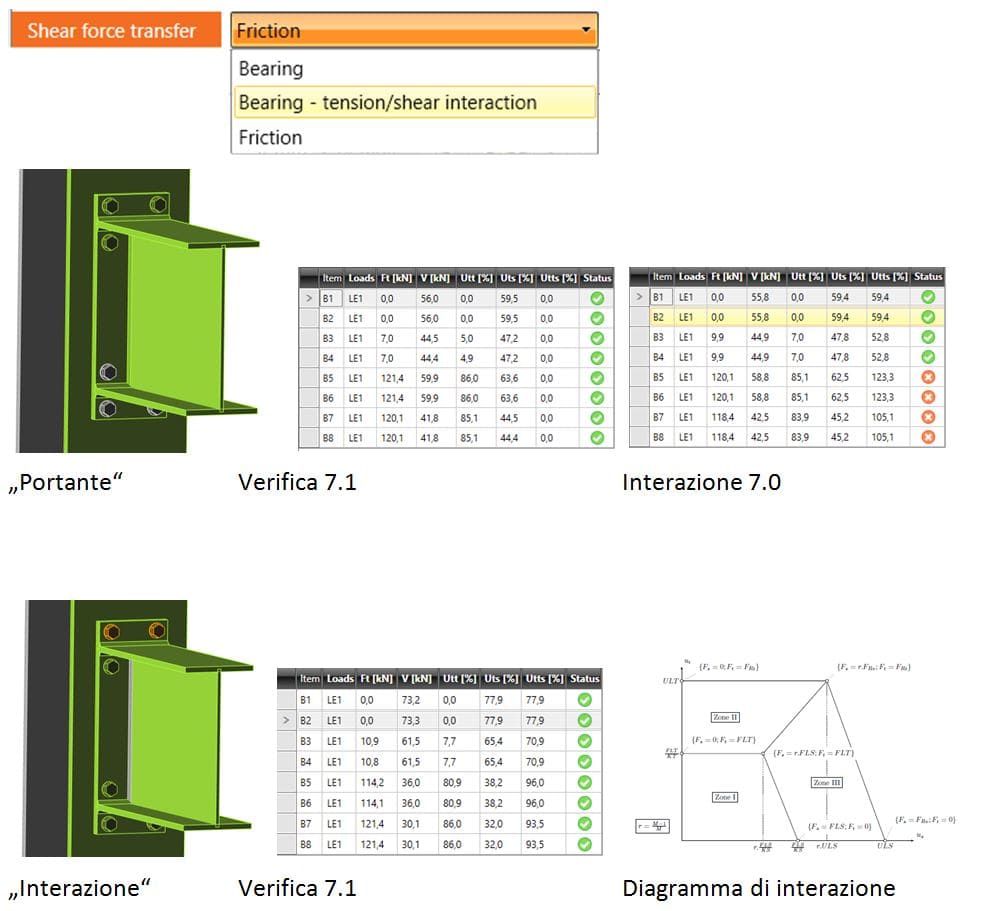 We have implemented more accurate welds model. Welds are model by a special elastoplastic element which is added between the plates. The nonlinear material analysis is applied and elastoplastic behavior in equivalent weld solid is determinate. Ideal plastic model is used and the plasticity state is controlled by stresses in the weld throat section.

Method of weld modeling from version 7.0 (and previous) can be still used for fast pre-design of complex connections. 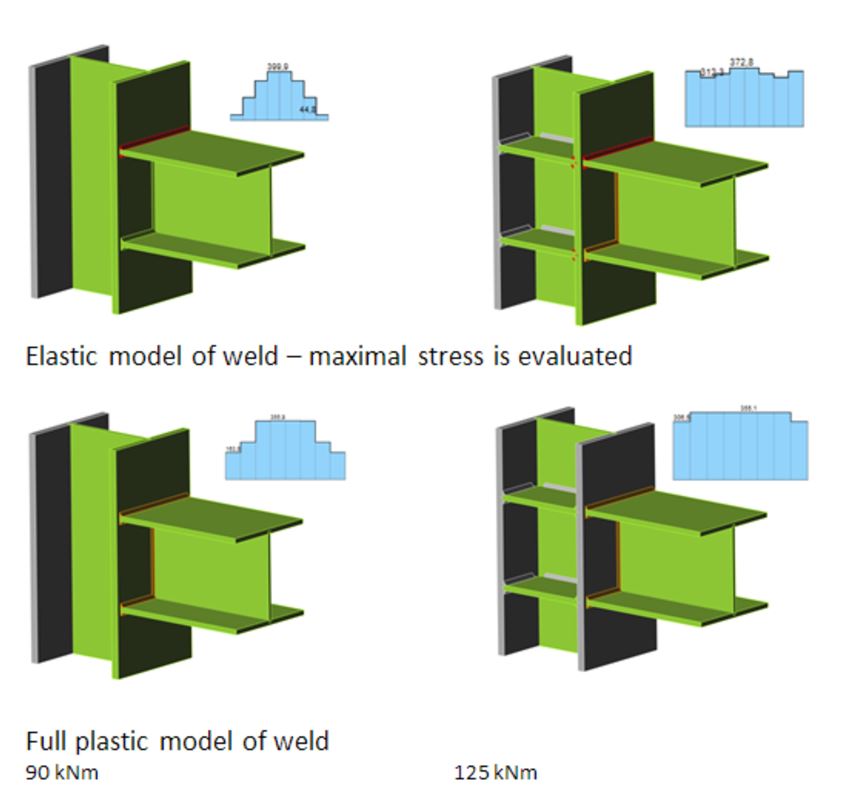 Joints design in seismic areas requires special types of details. We have developed input of notches of webs and special “dog bone” cuts of flanges to enforce plastic hinge on member. 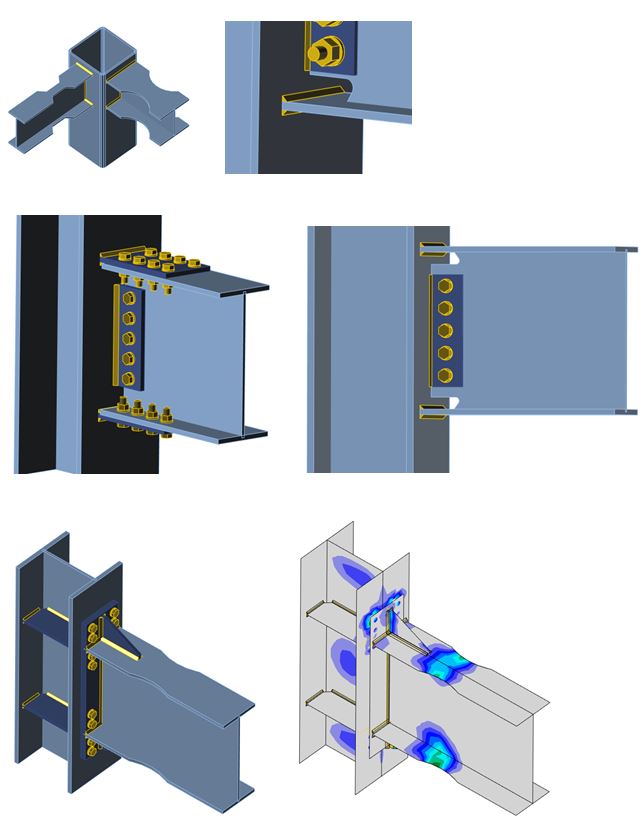 We have canceled item Results in navigator and implemented a new way of Report content selection: 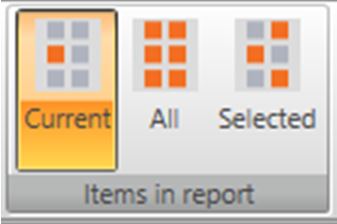 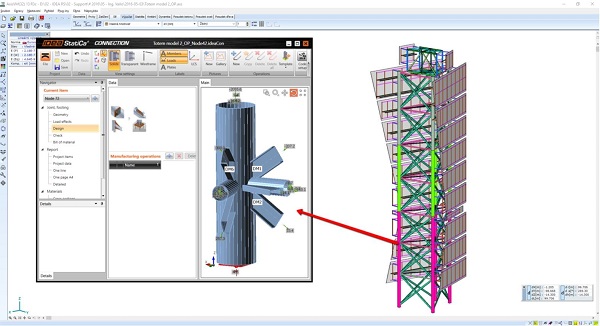 Rotational capacity of the connection

Rotational capacity of the connection is important value, especially in the case of seismic analysis. It provides information about connection ductility and ability of seismic energy absorption. Its value is calculated for 15% plastic deformation and can be found in the results table. 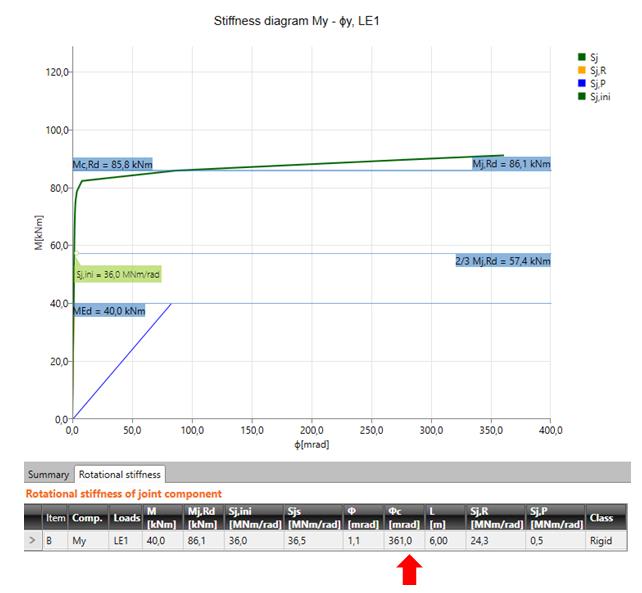 Members of steel joint are not aligned in one plane in many practical cases. Not fully parallel plates are slightly bended in reality. This is a problem in a mathematical model, but we resolved it in IDEA Connection now. 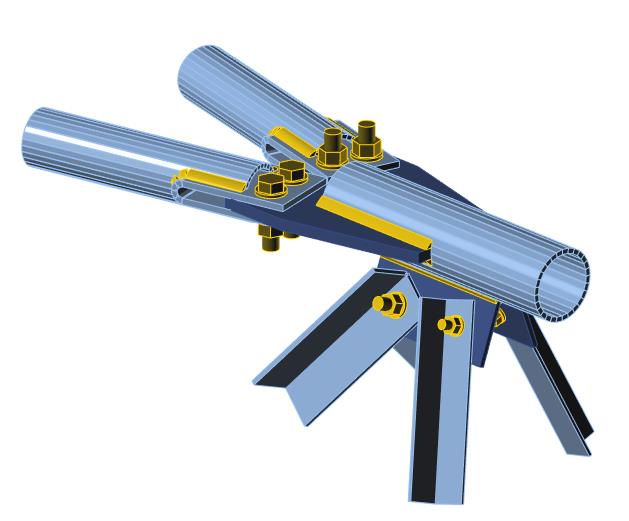 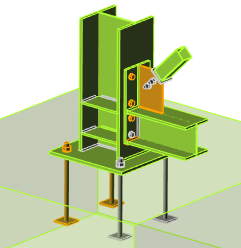 We have reorganized bolts checks tables and separated them into groups: 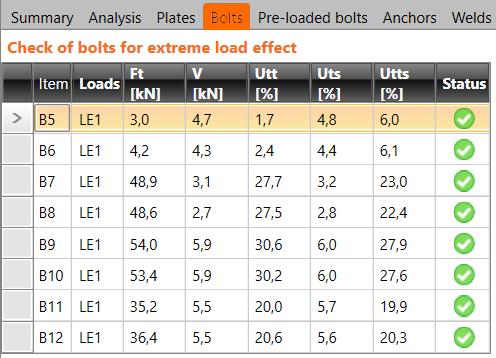 There are new types of CSS in IDEA StatiCa 7.1 – T profile as a part of I section and general cold-formed cross section defined by a table 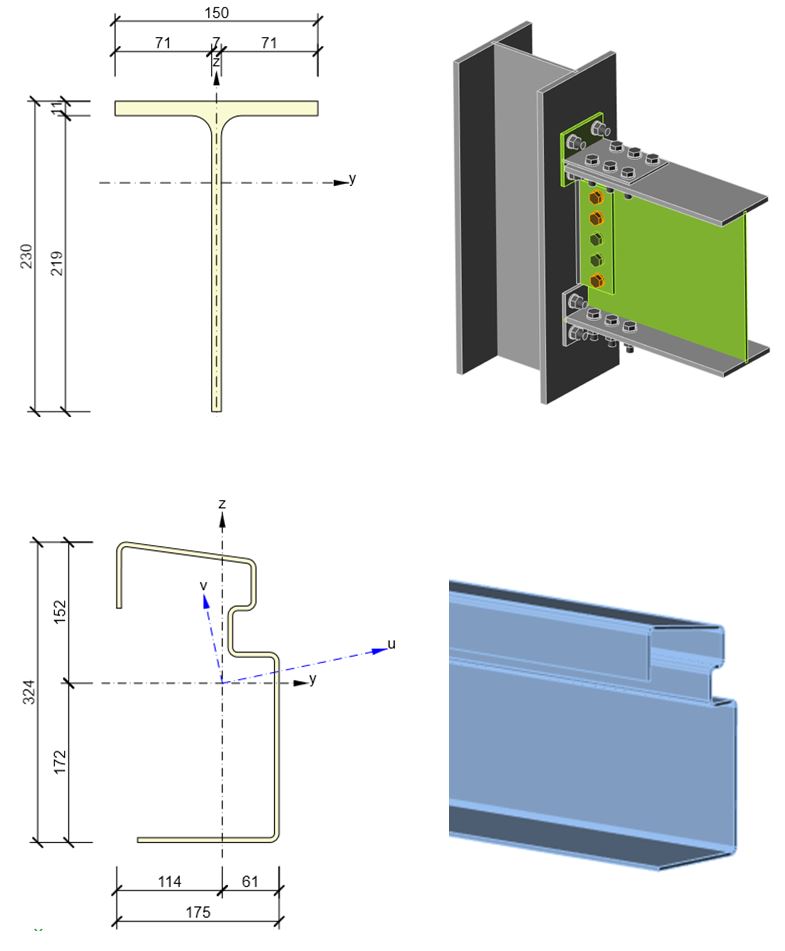 Start of buckling analysis by “one click”.  Standard analysis is performed automatically in background

Some of wide spread 3D FEA packages do not contain their own module for prestressing and construction stages or their solution is weak and does not cover the needs of the users. Due to the absence or unreliability of the links between those programs and the design tools (an independent programs or excel sheets), the workflow is interrupted and manual data transfer is needed at the interfaces. This system is ineffective and highly vulnerable. Significant improvement in completeness of tools for the workflow above is a reliable and seamless link between those programs and IDEA StatiCa Beam.

Improvement for more powerful links fot the transfer of structural models from FEA 3D to IDEA Statica for the structural design of the reinforced and prestressed concrete structures.

Example of the hall made of prefabricated elements in AxisVM

Summary of links for import from 3D FEA software

For structural design of concrete and prestressed structures the links for transfer of structural models from 3D FEA software into IDEA StatiCa have been extended and improved. 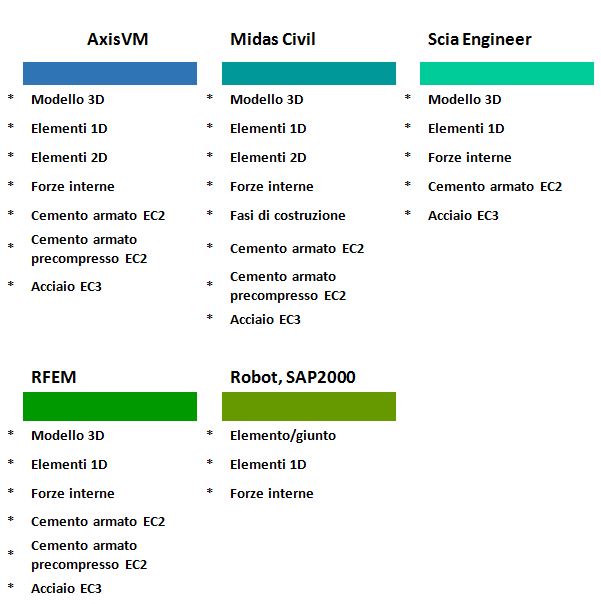 Some users need to calculate and check the deflection of partially prestressed beams. Even if the requirement for compression reserve (decompression condition) limits the use of partial prestressing, the cracks may appear due to characteristic combination, and would increase the deflection. Therefore the effects of (i) cracks and (ii) tension stiffening have to be respected even in prestressed beams.

Calculation and checks of beam deflections have been improved. The effect of shrinkage was implemented into deflection calculation of both reinforced and prestressed concrete beams with non-symmetrical reinforcement in the cross-section. Now, non-linear deflection of reinforced concrete, pre- and post-tensioned beams can be calculated considering the effect of creep, shrinkage and cracks. 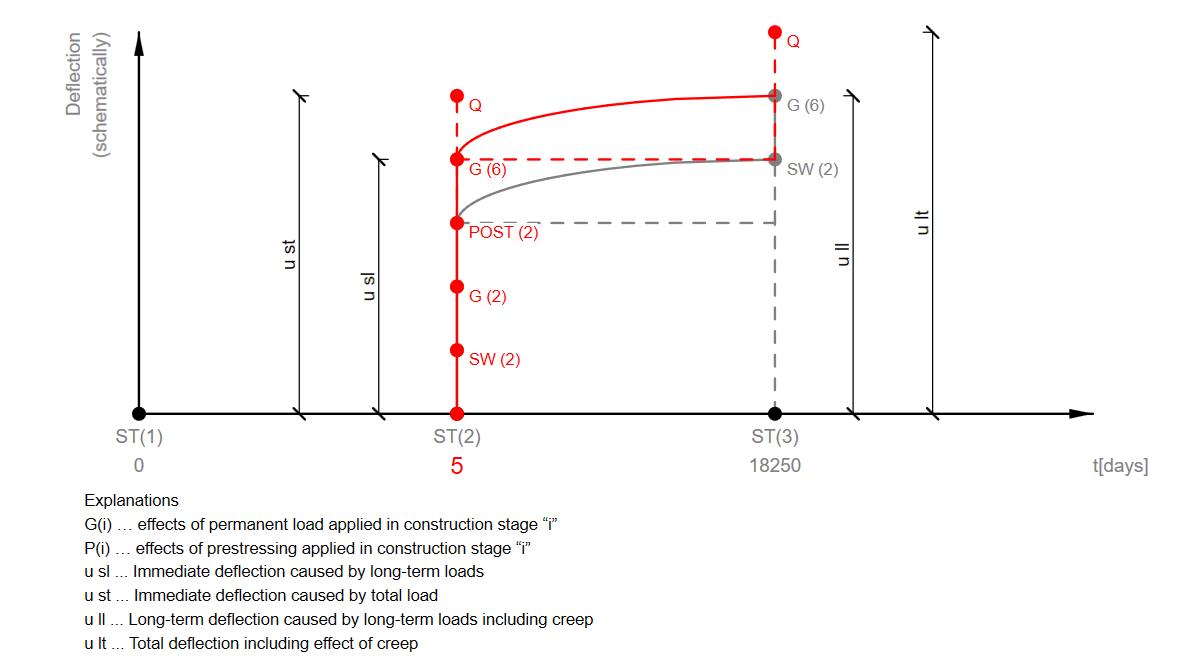 Both, long-term and short-term losses can now be displayed in the module for the design of prestressing tendons. All results related to tendon stress losses can be presented graphically and also as tabular data for all sections on the beam member. 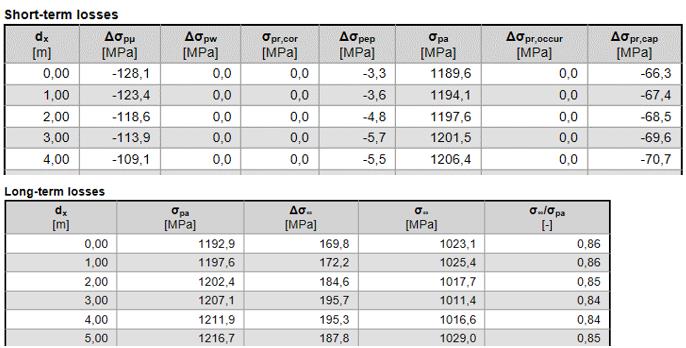 Faster loading of cross-section from BIM to RCS application

Speed of data transfer between BIM and RCS application is 20-times higher now.

Detailed results of stress checks in all fibres of concrete cross-section can be exported to Excel file. Therefore the user has the possibility to view all the stresses and strains, and not just the results of critical extremes 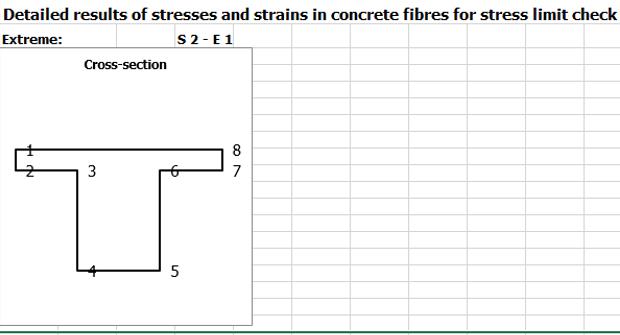 This feature is implemented into RCS module for Stress Limitation and Crack Width results and enables exporting of results as a tabular data (xls document). Geometric scheme of cross-section, stresses and strains for all fibres, and for all combinations are presented for exported data.

Railway bridges checks according to OVS00030-6

In the version 7.1, we implemented additional checks according to Dutch annex and OVS00030-6 for railway bridges (OVS00030-6 Ontwerpvoorschrift, Kunstwerken). The checks are done together with the calculation of the crack width in prestressed cross-section.

Safety and economy of column design has been improved. Geometrical imperfections are considered in direction of resultant moment and also in direction of major slenderness. Both cases are checked.

In case of asymmetric cross-section, imperfections are calculated in directions of their principal axes and then calculated moments are transformed back into main axes (input axes).

For cross-section in RCS application the imperfection can be optionally set to be assumed in direction of resultant moment or in direction of major slenderness. This setting is accessible from Design member data.